If you normally surf the internet and social networks, it is very likely that at some point you have come across the Fall Guys characters. The game has become a fever, with several hilarious gameplay videos circulating across the network. So it’s worth learning more about him.

Mediatonic developed the game and released it on August 4th, and it’s already enjoying tremendous success across the internet, having already had over 1.5 million players within the first 24 hours. But how does this game even work? 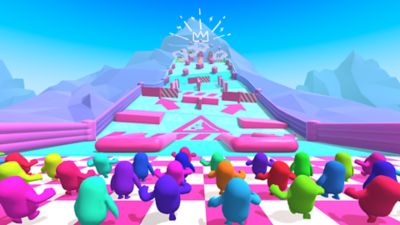 First off, Fall Guys is a multiplayer game in which each player controls some sort of colored “jellybean”. It’s still possible to customize your jellybean by choosing different costumes for the competition.

In addition, the goal of the game is to overcome obstacles and cross the finish line. With that in mind, each game begins with 60 players being eliminated at each stage until a single winner is left.

It’s worth noting that each stage presents a different challenge, with 13 types of stages with different challenges. Some of them the player has to overcome alone, others are done in a team. Overall, the competition has between 4 and 6 stages to crown the champion.

Watch out for the idiots

Some of the funniest (and most frustrating) videos involve characters being thrown off course by their opponents, eliminating them from the competition.

In this sense, Jelly Beans can not only walk, but also push, pull, jump and dive, as well as taunt their opponents. All of this can be used to hinder or distract your opponents during the competition and make them eliminated.

Fall Guys: Ultimate Knockout is available for PC and PlayStation 4 and can be purchased through Steam. You can find more articles like this on our website by clicking here.